Strangers with Benefits: The Rise of Sharing Economy & Why Startups Are Loving It

Chris is a Canadian amateur cyclist from Vancouver who is planning to participate in a major trilithon event in New York. The only problem he is facing is how he is going to take his favorite Swiss-made BMC road bike to the event, which will cost him almost as much as buying a new bike.

In New York, ever since Peter started his new job, which requires him to spend 2 hours commuting between home and office each day, he hasn’t had the time to ride his newly purchased high-end road bike. He mentions this to his colleague over lunch, who promptly suggests him to rent it on Spinlister.

So later that evening, Peter spends a few minutes checking the Spinlister website & lists his bike on it for $25 a day. Next morning, as he gets up and checks his email, he finds out Chris from Canada wants to rent his bike on his two-day New York trip. Bingo! While Peter wakes up making $50 off his idly standing bike, Chris finds a cheaper and considerably convenient way to compete in his dream event.

That’s the beauty of collaborative consumption of resources that has triggered the rise of sharing economy and numerous peer-to-peer (P2P) marketplaces in past few years. Today, over 9500 companies operate under sharing economy and let millions of people across the globe lend, borrow, rent, swap, or share homes, cars, rides, bikes, music gears, home-cooked meals, wardrobe, skills, Wi-Fi, and more with each other.

In 2013, a PwC study of five rising sharing economy sectors estimated that by 2025, these five sectors alone will generate a mammoth $335 billion in revenue and will overtake their corresponding traditional B2C counterparts. Given the speed with which the sharing economy is growing currently, these figures seem quite achievable. 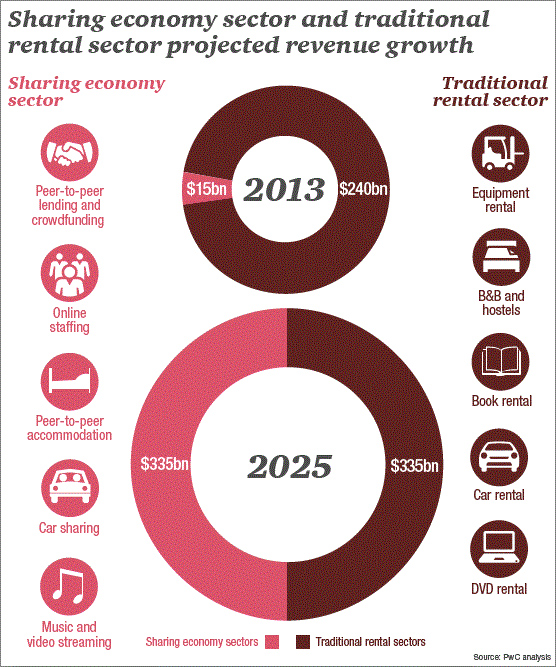 So far, more than $12 billion have been invested in P2P startups worldwide. And every now and then, a new P2P marketplace is making headlines, and expanding the reign of sharing economy.

It makes obvious sense that a good part of aspiring entrepreneurs & startups are trying to take a slice of this booming economic sector. But along with opportunities, there are challenges.

Below we have explained some fundamentals of sharing economy that will help aspiring entrepreneurs in understanding it better, as well as in launching a successful P2P marketplace.

What makes peer-to-peer marketplaces so successful?

In a time and age when people are coming closer through social media, sharing commodities does seem to be the obvious next step. Collectively, these peer-to-peer services have woven an online network that allows people to share things with each other without having to buy them. But more importantly, these marketplaces have given people a way to make money off their underused personal belongings.

Here are some key reasons that have played primary role in the success of sharing economy:

What Startups Have in It for Them?

The rise of the collaborative consumption of resources exhibits the concept of ‘access over ownership’, which most economists believe to be the future of consumption. As Theodore Levitt once said, ‘People don’t want a drill; they want a hole in the wall’.

According to The Guardian, in the US, 80% of private belongings are used less than once a month and self-storage is a $24 billion industry in the country. Given that the US holds about 26% of the world’s consumer market, it can be easily estimated that its worldwide value is over $92 billion. And that’s just for shareable products. Sharable services and skills will certainly add a few more billions to it.

These stats clearly speak about the abundance of opportunities lying for new players in the sharing economy. Although crucial to know, these figures give only a rough estimation at a very higher level. At lower level, entrepreneurs want to know about the opportunities lying right in front of them, and how to get into the game.

Recognizing opportunities for a P2P marketplace is rather simple. In any case, the process will begin by identifying the underutilized resources around you. It could be sports goods, adventure gears, kid’s stuff, space, vehicle or anything that you think can come in use once in a while but stays idle most of the time.

For instance, your kid’s childhood toys are lying idle in the attic ever since he went to college. It is understandable that you don’t want to give them away. But wouldn’t it be better, if there was a way to rent them out once in a while, and earn some money off them? If other people around you have the same notion, there is the scope for a potential peer-to-peer marketplace.

Once you are fixed on the business idea, what follows next is the typical business execution – gathering resources, advertising your brand, generating traffic, and so on. But talking about that will take the post in a different direction. However, if you are interested, here you can read about techniques to promote business in initial stage.

The whole concept of sharing economy depends on communal trust. People are only willing to share things with people they can trust. Thus, being a peer-to-peer marketplace, a business also needs to act as a centralized trust infrastructure.

In 2011, an Airbnb user complained about having her house thrashed by guests. At the time, Airbnb hadn’t had policies to tackle such kind of situations, which dragged company into a very dire state. But their popularity and necessary actions taken by the team later (such as insurance of rentals and provision for penalties in case of minor damages), somehow saved the company.

Over the past few years, many other peer-to-peer marketplaces have faced similar trust issues and have been questioned for their security policies. These incidents show that as a prospective P2P business, you need to take similar stringent security measures to build trust in your target audience.

Besides trust, many other factors need to be considered while launching a P2P marketplace. A few are briefed below:

Legality: In some countries & regions, generating revenue from the commodity you don’t own isn’t legal. It is important that you keep it in consideration while deciding your target market.

Demographics: Studies say that people who are single, have no children, and love to travel, tend to share things more easily. And about half of the sharers across the world are between the age 18 and 34. This kind of insights will help you narrow down your target audience.

Social Equality: The sense of communal trust comes primarily with social equality. Thus, it would help to ensure that people of your target market don’t have much inequality in their lifestyle & social status.

As sharing economy is leading us towards the optimum usage of resources, it is also transforming the present economic infrastructure by disrupting many existing B2C marketplaces that offers no or low reusability of resources. Besides, in the present era of constant connectivity, offering collaborative consumption of resources also make logical sense for businesses.

For every aspiring entrepreneur and startup, it is important to recognize this change, its implications, and adapt to capitalize on its benefits.

Here are some posts created by our team that throws light on developing different types of P2P marketplaces by sharing detailed analysis of business model, essential marketplace features, and suggestions:

Posted in Other by FATbit Chef.

25 Useful Tools & Resources to Make Your Startup Smarter in 2023 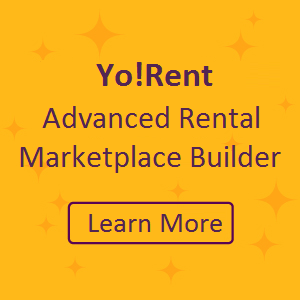