Since their introduction in 2008, mobile app trends have changed. A forecast from the Statista report highlights that in 2019, mobile users downloaded 209 billion apps on their devices. That figure is expected to shoot up to 258.2 billion in 2022.

This is welcome news for small and medium-sized businesses who faced difficulty while reaching their target audience and creating a buzz about their products/services. With the rapidly evolving mobile landscape and increased use of the lean methodology in mobile app development, enhancing brand recognition, improving customer engagement and attaining more significant growth is no longer a big deal for SMBs and large enterprises.

To help an entrepreneur understand the significance of having a mobile app for his/her business, take a look at current trends and future of mobile app market.

So far we’ve seen mobile app markets dominated by what appears to be a flurry of social media, entertainment, eCommerce and to a lesser degree, banking apps. The big players are Facebook, Youtube, Instagram, Amazon but that hasn’t stopped new players from trying their luck in the mobile app market. As per Statista, in the 2nd quarter of 2020, there were 28.7 million apps for Android users and 9.1 million for Apple users.

In the future, we’ll see more emphasis on app security and optimization. Google is working in that direction by setting out guidelines that require app developers to optimize their apps for the latest Android version. Likewise, Apple has also made it clear that abandoned apps, those that are outdated or can’t run will be removed from the App Store. On the whole, all these efforts will lead to a more refined and elevated user experience.

No matter how mind-blowing a certain technology is presented to be, people will only take it seriously if it promises total security. There’s more awareness now about the threat of cyber attacks and the kind of damage they can inflict with all the critical data available on the internet. Although banking apps run the greatest risk of being attacked, any app that stores its users’ personal data becomes a potential target. For example, in late 2016, two hackers were able to get the names, email address, and mobile phone number of 57 million users of the Uber app.

This urgency to offer enhanced security is felt throughout the mobile app market. As a result, we’ll see app developers work on strict guidelines with major emphasis on security. In the future of mobile apps, there will be no place for apps that can’t guarantee the security of user’s data.

AR and VR are lauded as a futuristic technology and it’s destined to play a key role in mobile app development. Pokemon Go gave us a glimpse of how it can be integrated into the mobile ecosystem. In addition to gaming apps, Augmented Reality’s application will extend massively into eCommerce & marketing apps.

As per statista the Total consumer downloads of augmented reality applications worldwide in 2022 are predicted at over 5.5 billion. Augmented reality allows users to interact with content at a more detailed level. This will encourage leading mobile app developers to set high standards for user interface design.

As the name suggests, instant apps work instantly by tapping on their URL. This eliminates the need to download and install apps on the smartphone. Now is the perfect timing for instant apps to make a dent in the mobile app markets. The app usage might be on the rise, but people still have their qualms when it comes to accepting new apps. As per Statista, more than 50% of smartphone users in the U.S download zero new apps per month.

Furthermore, 21% of users abandon an app after first use. App discovery can still do with some improvements. Users rely a great deal on App Store reviews to give new apps a try. Instant apps will put an end to all that. Even so, their most crucial role lies in simplifying online payments.

In the case of eCommerce apps, if you’re a new user you’ll have to manually fill in your card details in your first usage (you can, however, opt to save the same card details for future transactions). Instant apps offer a more convenient solution, wherein customers can make payment directly via Google Pay or Apple Pay. This approach has the potential to take mobile commerce transactions through the roof. Hence, there’s every reason we’ll see Instant Apps given more push in the mobile app markets.

If we look back a decade or two, we can only marvel at our technological innovations in such a short span of time. Yet experts will tell you we’ve only begun to scratch the surface of endless possibilities. There’s a great deal of truth in that. The more technology advances, the better we become at pinpointing its limitations, which further helps us define the areas of improvement.

Something similar is going on in the realm of the Internet of Things (IoT). There’s been a spree of smart devices one after another aimed at our very specific needs. The smart home solutions have thermostats, cameras, doorbells, alarm systems, locks, smoke alarm and the exciting smart personal assistants like Google Home, Amazon Echo or Apple HomePod. Forecast by Statista suggests that by 2030 around 50 billion of these IoT devices will be in use around the world, creating a massive web of interconnected devices spanning everything from smartphones to kitchen appliances.

Smartphones carry all the features like GPS and multiple connectivity options viz. Wifi, Bluetooth, and NFC which are essential for IoT’s utilization. As a result, we’ll see the mobile app’s demand rise concurrently with the IoT’s proliferation.

Get a Custom Mobile App Designed around your Requirements

Given the unprecedented success of mobile apps, one could be forgiven for thinking this field will soon run dry of innovations and creative ideas. Yet, time and again, we’ve witnessed the opposite. In each successive iteration, we see mobile technology go from one level to another and change our lives for the better. It’s clear, their success is not a flash in the pan and there’s still a vast amount of untapped potential in this industry. The future of app trends will be shaped by how businesses harness technology to solve people’s everyday problems with custom mobile app development.

Mayank is a full-time blogger with a deep inclination towards the technology trends. He likes reading and analyzing the market trends. His blogs are primarily about the way technology can be used to bridge the gap between present and future. You can connect with him on LinkedIn.

Awesome site and posts are great

You’re Welcome.
Keep Visiting us for more such information.

It’s really helpful for us.

Mobile app development has come a long way since the first smartphone came into existence. Thanks to the constant change brought about by technological advances in the

Nicely explained all mobile trends. I am glad to read the article. Thank you for sharing.

Thank you so much for your appreciation. Stay tuned for more insights.

It’s an interesting mobile app development trends you have shared. It’s helpful. Thanks for sharing this. 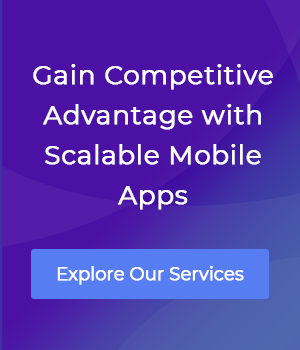