In the co-evolving dynamic ecosystem where the emphasis is on nimbleness and speed, ventures are investing in minimum viable products by immediately eliciting feedback from first-time users. After an initial launch, the MVP is revised and the improvement cycle starts all over again – testing, redesigning offerings, and making adjustments in small (iterations) or substantive ones (pivots) to validate the idea.

But, new ideas are often few and far between. This means that the hypotheses that are summarized in a framework (business model canvas) are usually based on details or nuance, for example, a new feature or functionality. So, it becomes essential for startups to be perceived as truly distinctive, for which they can evaluate and refine their offerings iteratively by harnessing the information gleaned from first-time users.

As compared to full product development, building an MVP is a better approach for startups as its time to market is less. The huge amount of money that’s otherwise unreasonably spent on non-essential things is also curbed. With MVP software development, businesses can scale at their own pace.

With that in mind, in this blog, we have covered the top examples of businesses, who instead of developing a product in a regular insular fashion, launched lightweight and readily adaptable versions, MVPs, and went on to become successful giants, they are today.

For inspiration and learning, here are stories of successful startups that once started as MVPs:

The well-known, custom-multipage shopping destination for individuals is one of the most successful examples of a minimum viable product that made it big. Though very few people might know that Amazon once started as an online bookstore in the early 1990s. At that time people did not trust the internet and having an online store of ‘everything’ was just not possible. But, Bezos (the founder) had a vision of building a massive empire. He read a report stating the annual growth of web commerce in the immediate future would be 2,300 percent upwards. So, he started by creating a minimum viable product.

The first phase of development included streamlining top 20 products that could be effectively marketed on the internet which were further narrowed down to 5. But, Bezos eventually landed on books as the most marketable product online. The decisive factors included – price, several titles that could be sold, and high demand for books all over the world. So he started by buying books from the distributors and selling them at a lower price angle through a simple website. While most entrepreneurs would have invested in a fully functioning store. Bezos operated frugally and tested his idea through a simple website (MVP).

With the surge in the order of books online, more books were listed. The MVP was great and continual innovations over the next two decades were done to expand the product offerings. A comprehensive list of features was added to the website and a warehouse was also acquired. Currently, Amazon is the retail leviathan and has surpassed many eCommerce giants for the title of world’s largest retailer (outside China).

Founded in 2007 by MIT students Drew Houston and Arash Ferdowsi, Dropbox is a fantastic file-hosting service that currently provides customers with extensive cloud features like personal cloud, client software, cloud storage, and file synchronization. When the founders came up with the idea for a cloud-based file syncing service, they realized that building an actual hardware infrastructure would be incredibly time-consuming and expensive. So they followed a scaled-back approach to test the idea and made a simple video (as the MVP) that told prospective investors what the product would provide to customers once it was created and launched.

Despite being simple, the video was highly successful and encouraged over 70,000 signups from people curious to learn more. The feedback provided was also pivotal to building and developing Dropbox to what it is today. They also reverse-engineered Apple’s finder system to introduce their own icon onto the top dock. Intrigued, Steve Jobs also offered to acquire the company. Despite multiple opportunities to sell the company in early stages, Dropbox has displayed a stunning ascent with its founders solving the messiest dilemma: “How do you get all your files, from all your devices, into one place?” Currently, the site offers 100GB of storage for a base subscription of $10 per month and its 50-million user figure is also up by threefold.

Started as a single featured MVP in 2009, Foursquare is a location-based social network. Earlier in the day, it allowed users to check-in from different locations, share with their friends and family, and in return, they won badges. There was no special functionality or sophisticated design, only that gamification made people excited about using the service. This made the product increasingly popular and as you know, now Foursquare is a comprehensive city guide that is used worldwide to look for hotels, restaurants, places for entertainment, and more.

Adwords express is used to generate relevant ad copy for customers. From the start, its process appeared to be automated. But, on the back-end, a group of students would quickly type ads and deliver them to the customers. When it became obvious that people wanted this service, the process was fully automated and AdWords Express was further developed.

Founded in 2008, Groupon was a piecemeal MVP that promoted services offered by local businesses and offered deals that lasted for a limited time through a simple WordPress website. The concept was simple; if visitors wanted to avail themselves of a few coupons, they would subscribe and the team of Gropoun would mail coupons in PDF format. Quickly Groupon amassed an email list of customers who engaged with the site and got the data that was needed to create a full Groupon website that exists today – A hugely successful platform that operates globally.

The MVP of Instagram allowed users to just share photos and apply filters, initially allowing Kevin Systrom, the founder to see if the market approved of the product. The application was liked by users and since then, all the incredible features we see today – messaging, business profiles, stories, live telecast, tagging, hashtags, and much more have been a part of Instagram’s amazing success story. Globally, there are 1.074 billion Instagram users now.

The popular social networking site Facebook was founded by Mark Zuckerberg in 2004. The basic MVP idea was to connect students of Harvard. Using the platform, users were able to post messages on board and the idea proved popular enough to expand the platform with more complex features. Mark ultimately evolved Facebook into what we know today.

Zappos, a popular online retailer that started in 1999 as a simple MVP to determine if an online store of shoes would be popular, i.e. if anyone would purchase shoes without trying it on first. Nick Swinburn, the founder, created a simple website under the domain of shoesite.com and identified the market viability of the product. Needless to say, the MVP was successful and in 2009, Amazon acquired Zappos for a staggering $1.2 Billion. Since then, the platform has been growing incredibly, bringing more than $1 Billion of sales each year. Today, they sell shoes as well as clothing, accessories, and more.

Airbnb started as a simple site in 2007 when Brian Chesky and Joe Gebbia were struggling to pay the rent of their accommodation in San Francisco. As a solution, they thought of renting the top floor of their apartment to the visitors. As an MVP, an ad about renting an air bed on a basic web page was placed. It consisted of their housing pictures and soon they had three guests. The idea was proven and the platform was redesigned. Today, Airbnb not only offers accommodation but also provides its users with a list of restaurants, events in the cities of their destination along with feedback and ratings. What was once a startup is now valued at 30 billion dollars with 4 million listings.

Is a perfect example of a concierge MVP. It sends users recipes and deals from various stores so that they can save money while considering their choice. The founder team initially had only one customer to serve and he got a concierge treatment. Instead of interacting with a digital app, the company’s CEO, Manuel Rosso, would personally visit the client weekly. So on, for early customers, the founder together with the VP would review what would be on sale in stores and based on the client’s preferences select the recipes. The products would be delivered to the homes of the users weekly, soliciting feedback. The process was automated once the model became viable.

In an ever-changing market, the fallacy of having a perfect business model has been replaced by MVP software development. It significantly de-risks the investment of building a fully baked product and lets startups focus on quick adaptation to market via product validation. Also, as mentioned above, most successful MVPs don’t stay startups for long. So if you are an entrepreneur who is on the frontier of innovation and is looking for MVP software development services, contact FATbit Technologies. With their years of industry experience, the company can help you in finding errors for faster wins through its services for MVP development.

Posted in Other by Vibha Sharma.

Vibha is a content marketer and editor at FATbit Technologies.

25 Useful Tools & Resources to Make Your Startup Smarter in 2022

How to Build an App Like Uber Eats? A Detailed Guide

How to Build a Cleaning Services Website- A Complete Guide 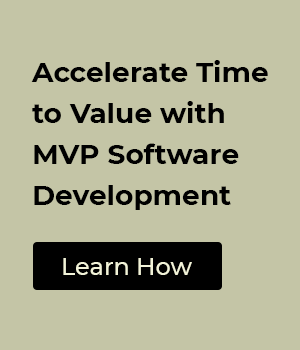