Who Designed and Built Groupon website & Made it Billion Dollar Brand?

Groupon may no longer be the most promising web property it was some years ago but it certainly has a legacy of its own. One of the fastest growing companies of all times, it gave rise to the deals phenomena globally.

In this blog post, you will find what Groupon is all about, who came up with the idea, and developed Groupon website into a brand.

Groupon is a company that was created around the concept of discounted deals. The website hosted deals from small business and national companies and sent latest deals to registered users through email updates.

Launched in November 2008, the company is known as the brand which came up with daily deals business model used by thousands of similar companies all over the world.

Andrew Mason came up with the concept of group buying in a different project called The Point backed by Eric Lefkofsky. The idea however took the backseat as the project shaped up and caught the attention of Eric Lefkofsky after several months passed.

The financial turmoil of September 2008 gave impetus to the dormant idea of group buying and Groupon was born. While Andrew Mason was responsible for Groupon’s core values, Eric Lefkofsky was the person who pushed to company to grow at monstrous pace.

Groupon website was initially built on WordPress blog which was probably taken care by the internal team. The website however lagged in the user experience field and the task of upgrade was given to a Chicago based company.

Groupon registered phenomenal growth after the new site went live and sales increased by more than 700%.

Hundreds of web development companies claim to develop daily deal platforms but very few have the technical expertise to create a secure deals website. User experience is another factor that can determine the success and failure for a deals platform. Hence, it is important to choose your daily deals website development partner wisely.

If your deals website idea is based on an entirely new concept, the need of a professional development team becomes even greater.

Our team of experienced designers and developers has worked on thousands of ecommerce projects. Share your daily deals idea with us and learn how we will promise success to your online venture. Request free consultation session before making any monetary investment.

Posted in Other by FATbit Chef.

25 Useful Tools & Resources to Make Your Startup Smarter in 2023 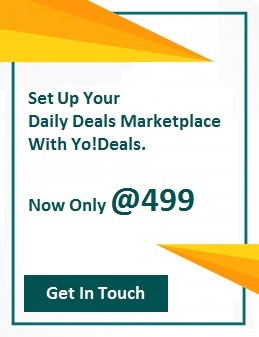